Living stories on one of Australia's truly historic aerodromes

Come and see the fascinating story of nearly a century of aviation in the Narromine region, as told through photographs, records, artefacts and aircraft.

1916-39: The time of the 'barnstormers'. What is now Australia's oldest regional aero club hosted such visitors as Sir Charles Kingsford Smith, Jean Batten and Arthur Butler, as well as some of the country's best-known air pageants.

1939-45: War brought flying training units and a top-secret British bomber squadron to town. Of nearly 3,000 pilots trained here, some 30% did not return from the war.

Aero Club Scrapbook.Narromine Aero Club’s 1930s scrapbook has survived war and flood, and you can thumb through a copy of it in a simulated period ‘setpiece’ at the museum.

The Vic Hall collection.Narromine Post Office Worker Vic Hall had a passion for aviation, photography and drawing during the ‘barnstorming’ era of the 1920s and 30s. It is thanks to him that the community has such a rich record of the air visits and pageants of that time.

Rolls Royce Merlin 25 aero engine.The Mosquito B.IV bombers of 618 Squadron RAF were modified for speed at low altitude to suit their ‘Highball’ role (see 1945 in the timeline). Alterations included a bulged bomb bay and release gear for the spherical bombs, an arrester hook for aircraft carrier operations, and 1,630 horsepower Merlin Mk 25 engines with four-bladed propellers. This rare engine from one of the squadron’s bombers, which was bought at the aerodrome auctions in 1947, has been generously loaned by Mr Russell Peacock.

Diorama model of the aerodrome, set during the Second World War. This diorama was made with meticulous attention to detail by Ian Dennewald of the Sydney firm AUSTEK Models. References used were archival plans and photographs provided by the museum. Included are 30 tiny Tiger Moth aircraft of the RAAF Elementary Flying Training School dispersed around the aerodrome. The diorama is to a scale of 1:750, measuring 2 x 2 metres, and forms a centrepiece in the museum.

Displayed in the museum's new wing are three aircraft believed to be unique in the world: 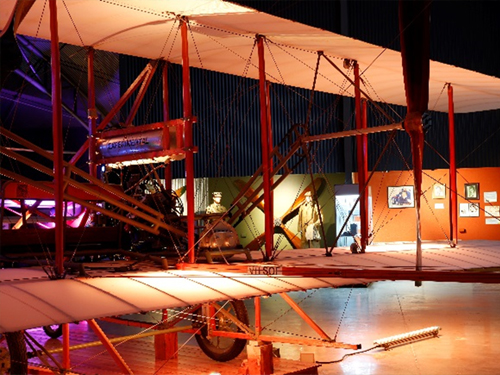